‹›
1234
About Us
About the Louisiana LotteryLouisiana Lottery Corporation began in 1991 after the 1990 state Legislature proposed a state lottery (ACT 1045) as a way to generate revenue without increasing taxes. Due to the Lottery's unique operations, the Legislature recognized a corporate structure would suit it best.Voters also liked the idea and passed a constitutional amendment in 1990 creating the Louisiana Lottery Corporation by a 7 to 3 margin.In 2011, the Lottery celebrated the 20th Anniversary of the sale of its first scratch-off on Sept. 6, 1991.In 2003, voters passed another constitutional amendment to dedicate Lottery proceeds to the Minimum Foundation Program that funds public education in Louisiana.Public trust is paramount to the Lottery's success. To ensure the highest level of accountability, the following have varying degrees of oversight over the corporation, including its budget, drawings and administrative rules.Governor of LouisianaJoint Legislative Committee on the BudgetSenate Judiciary B CommitteeHouse Committee on Administration of Criminal JusticeAttorney GeneralBoard of Directors 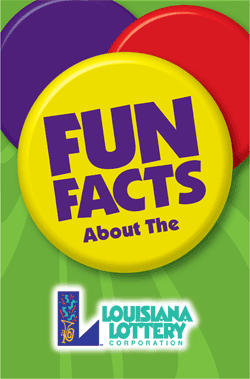 In addition to an annual clean bill of health from the Legislative Auditor, the Louisiana Lottery Corporation continues to receive national recognition for excellence in financial reporting.For a printer friendly version of an overview of the Louisiana Lottery, download our Fun Facts brochure.For more detailed and historical sales and state transfer information, see our 2022 Media Kit. To view, download, or print this file in PDF format, you must install the Adobe Acrobat Reader (free of charge) from Adobe's website.
Where The Money Went
Where the Money WentFiscal Year 2022 (July 1, 2021 - June 30, 2022) 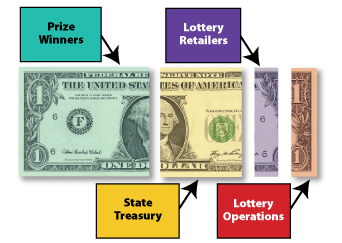 $328.4 Million to Prize WinnersMore than half of Lottery sales are reserved for prize expenses. Prizes not claimed are returned to winners in the form of increased payouts on scratch-off tickets. Players have won more than $5 billion in prizes since the Lottery's inception.$191.2 Million to State TreasuryEffective July 1, 2004, the Louisiana constitution provides that Lottery proceeds be earmarked for the Minimum Foundation Program (MFP), which funds K-12 public education in Louisiana. In addition, the first $500,000 in annual Lottery proceeds is earmarked for the Louisiana Department of Health and Hospitals-Office of Behavioral Health to fund problem gambling programs.More than $191 million was transferred from sales in fiscal year 2022. As of fiscal year 2022, the Lottery has cumulatively transferred more than $4.3 billion to the state treasury, averaging 35% of its revenue.$32.9 Million to Lottery RetailersRoughly 2,800 businesses in Louisiana earn 5% commission on the sale of Lottery products as licensed retailers. In addition to revenue from commissions, retailers earn an incentive of up to 2% for cashing winning tickets of $600 or less. Retailers are also paid a selling bonus of up to 1% on the sale of winning tickets for Lotto jackpots; Easy 5 jackpots; Powerball and Mega Millions match-5 prizes (including Power Play and Megaplier winnings); and Powerball and Mega Millions jackpots (1 percent of Louisiana's contribution to the jackpots cash value or a minimum bonus of $25,000). Retailer commissions, incentives and bonuses reached reached $32.9 million in fiscal year 2021, amounting to more than $671.8 million since the Lottery's inception.$29.2 Million to Lottery Operational ExpensesThe Lottery retains approximately 5% of its revenue to fund statewide operations, including its headquarters, five regional sales offices where players claim winning tickets, technology for generating tickets and conducting drawings, ticket printing and shipping, advertising, promotions and staffing. For the 23rd consecutive year, the Louisiana Lottery received the Certificate of Achievement for Excellence in Financial Reporting from the Government Finance Officers Association of the U.S. and Canada. The Louisiana Lottery was also the first in the country to receive industry verification that its quality assurance testing met best practices.The Louisiana Lottery's latest quarterly financial statement, balance sheet and comprehensive audited financial report for the last fiscal year, can be found on the Lottery's website at www.louisianalottery.com.
Financials
Louisiana Lottery Financial InformationQuarterly Financial InformationIn accordance with the provisions of La. R.S. 47:9021, the Louisiana Lottery Corporation publishes quarterly financial statements in the official journal of the state, including a statement of cash flows to identify the disposition of all funds expended by the corporation for any purpose: